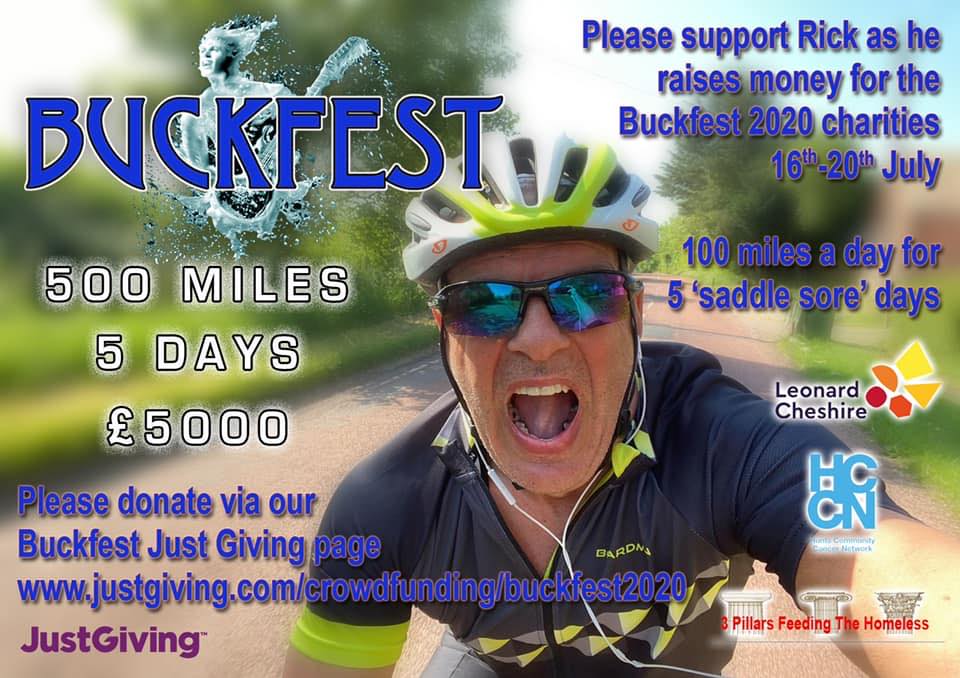 Rick Holden, one of our Senior Account Managers at Atkins Gregory, will cycle 500 miles in five days in an effort to prevent three charities missing out on thousands of pounds due to be raised by a local music festival.

Rick, the Founder and Chair of the Buckfest Music Festival, is hoping to raise £5,000 for Huntingdon Community Cancer Network, Leonard Cheshire Homes Brampton and 3 Pillars Feeding the Homeless after the 11th annual event was forced to cancel due to COVID-19.

Rick is the founder of the Buckfest Music Festival, which started in the Cambridgeshire village of Buckden 10 years ago and has since raised over £60 000 for charity, generated over a quarter of a million pounds for the local economy, and has even been voted Cambridgeshire Festival of the Year four years running in a poll run by the East Anglian Festival Network.

The organisers had set a fundraising target of £12,000 for this year’s event, with two thirds of the money raised going directly to their chosen charities to fund some incredible initiatives and projects in the local community. However, with Buckfest one of the many 2020 events to fall victim to COVID-19, Rick is desperate to minimise the effect on the festival’s charity partners.

Rick says: “As a keen cyclist I am intending to cycle 500 miles, in 5 days to raise £5000. It is a massive challenge but the thought of the charities not having the funds they require will, I’m sure, drive me on to complete the task.”

If you would like to support Rick, and the charities involved, click here to visit his Just Giving page: www.justgiving.com/crowdfunding/buckfest2020

Atkins Gregory has been a long-time supporter, sponsor and friend of the Buckfest Music Festival, and is delighted to support Rick in this endeavour.

Find out more about: